For this past season I was able to work for the Cleveland Browns in Guest Services. In my job I ended up being the security for the door from the ramps to the Press Level, making sure anyone who came in that door had the proper credentials. Many weeks I also checked four suites before and after the game to make sure everything was working properly.

Anyone who knows me knows I love sports and sports history, so being able to work in an NFL stadium was quite the experience for me. As most know by now, the Browns just finished their season at 7-9. While it's an improvement over last season (5-11), it ended on a five game losing streak. In early November, the Browns were in first place, but ended up in their all-too-familiar final place at the bottom of the AFC North. Since returning to the NFL in 1999, the Browns have had two winning seasons: 9-7 in 2002 (which was their only playoff appearance) and 10-6 in 2007 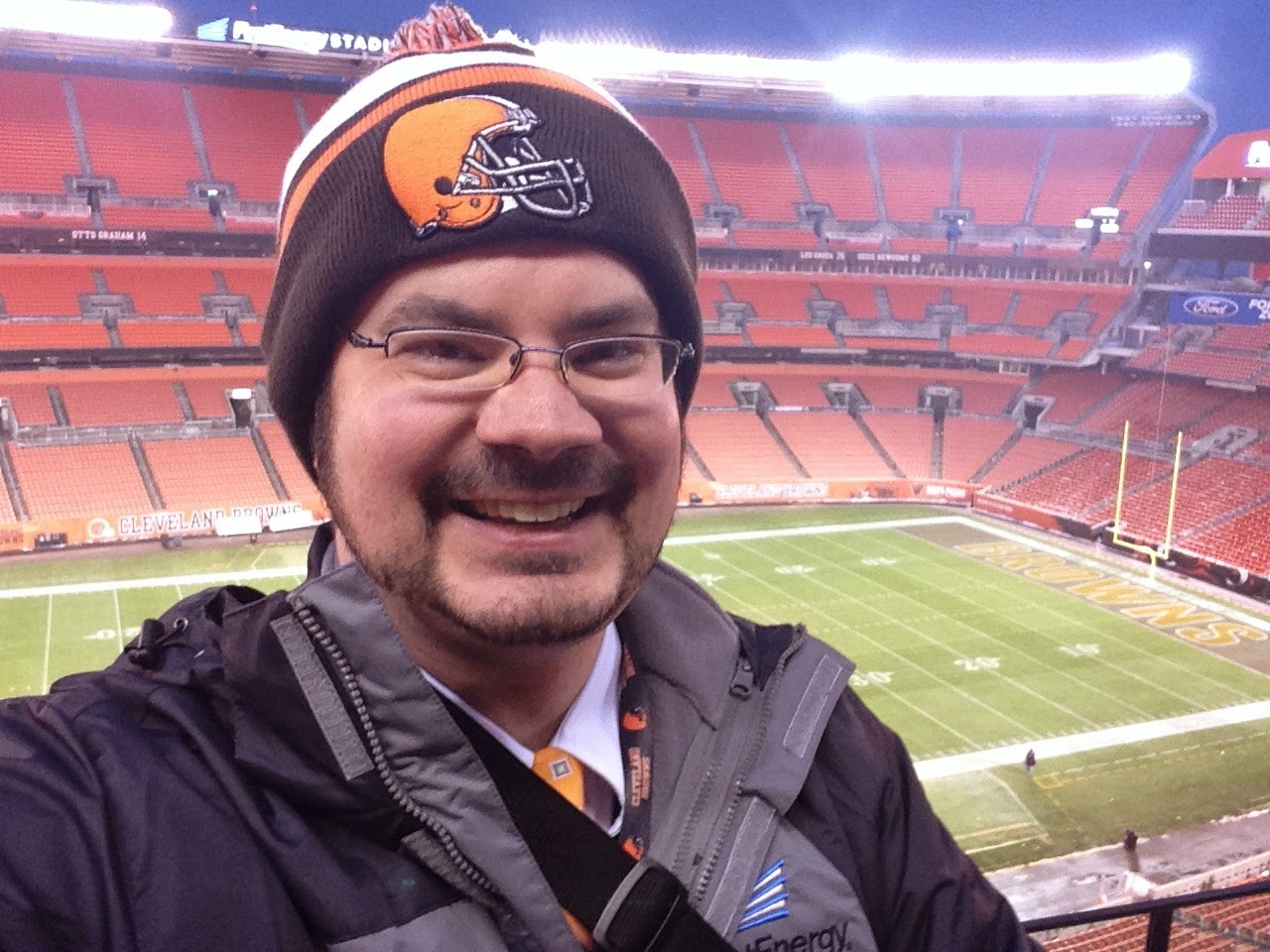 Working in the stadium gave me the opportunity to see the "behind the scenes" aspect of stadium operations, but I was also able to interact with a lot of fans during the season. At various times during each game, I would usually position myself out on the ramp just outside the door I was watching. Not only did it discourage smoking (mostly at halftime), but many times people would come ask me for directions or to verify they were headed in the right direction. Even though the ramps were designed mainly for exiting the stadium, they were quite popular for people entering the stadium if they didn't want to wait for the escalators or use the stairs. Being able to interact with the fans was usually a pretty good experience, especially after a Browns win. I would often say after a win that "peace and good will" was free-flowing at the stadium. It was especially evident after the season-opening win over the Saints (on a last-second field goal), the first hope-opener win for the Browns since 2004. A Saints fan even remarked how happy everyone was around her and I replied "we're not used to this!" She smiled and said a few years ago, Saints fans were the same way!

One thing I was really hoping for (besides the Browns making the playoffs) was for the team to have a winning season at home. I knew coming into the season that the Browns have had just one winning season at home, when they went 7-1 in 2007. While they started out 4-1 this year at FirstEnergy Stadium, they ended up 4-4 (though they could've easily ended up 6-2 as two losses were in the final minutes of play). I decided to look up their all-time records at home to see how they were at the old stadium and ended up finding some interesting pieces of information, at least for a statistical geek like me.

At FirstEnergy Stadium (previously known as Cleveland Browns Stadium until 2013), the Browns have an all-time record of 51-77-0 for a winning percentage of just .398. That is absolutely atrocious and is one of the reasons the stadium has become known as the "Factory of Sadness". The other reason is the nature of the losses. While I don't have all the scores, there seem to have been a large amount of close, excruciating losses at home where the Browns gave up the lead late in the 4th. There were two such home games this season. In going through the seasons, as I mentioned, the Browns have just one winning season there. In their 16 seasons at FE Stadium, they also have nine losing seasons and six .500 (4-4) seasons, including this past season. The stadium has never hosted a playoff game (the Browns haven't hosted a playoff game since 1994) and it's currently the only NFL stadium that hasn't hosted any postseason game. Of those nine losing seasons, the worst was the very first season when they went 0-8 in the inaugural 1999 season after being reactivated as an expansion team (team was 2-14 overall with both wins coming on the road), That was the first (and so far only) time in franchise history the team went winless at home. The second worst season was a 1-7 mark in 2008, the season after they had been 7-1.

I decided to go through all of the Browns seasons and see how well they had been at home when they played at old Cleveland Municipal Stadium, their home from 1946-1995. I was only 13 when the move to Baltimore was announced, so I don't remember a lot of details from those previous seasons, but I do remember they typically won more at home. What I found in looking over the stats confirmed this. In the 50 seasons the team played at Cleveland Stadium they had nine losing seasons TOTAL. So, in just 15 seasons at FirstEnergy Stadium (since this 16th season was .500), the Browns have already equaled their total of losing seasons they had in 50 seasons at the old stadium. At Cleveland Stadium, the Browns also had five seasons where they finished at .500. Every other season was a winning season (36 total) for an overall record of 239-126-6 (.652), which includes their 28-2-1 record in the AAFC (1946-49) and a 12-5 (.705) mark in postseason games (3-0 in home AAFC games and 9-5 in home NFL games). They also had no winless seasons and five undefeated seasons (1948, 1949, 1951, 1953, 1957) at the old stadium. In fact, the Browns didn't even register their first losing season at home until their 11th season (1956), when they went 1-5. After that, they wouldn't have a losing season at home again until 1974 and 1975 when they went 3-4 both seasons. The longest stretch without a winning season at home was four seasons (1990-1993), and the 1992 and 1993 seasons were both .500 seasons.

In contrast, the Browns at FirstEnergy Stadium went eight seasons before having that sole winning season in 2007 and are currently on a seven season drought since then. FirstEnergy Stadium also holds the longest drought in team history of not hosting a playoff game, now at 16 seasons (17 total counting the final season at Cleveland Stadium). Prior to that, the longest drought was 14 seasons (hosted in 1971 and not again until 1986).

Obviously from a fan's perspective, I hope the team finally turns it around and starts having consistent winning seasons at home (and overall) as opposed to the consisted losing it currently has. The Browns still have a very large and loyal fanbase as evidenced by not only the attendance at home yet again this season, but the large crowds of Browns fans present at most road games this year, especially Atlanta, Carolina, Cincinnati, and Tennessee. It seems every sports league has a team like the Browns: a proud and illustrious history, but a long championship drought and no recent success, along with periods of dysfunction or other poor management or just bad luck. In the NHL, it's the Toronto Maple Leafs (no Stanley Cup since 1967, but second most overall), in the NBA, it seems to be the New York Knicks (might be the most dysfunctional team in the NBA...haven't won anything in decades), and in Major League Baseball, the Chicago Cubs (over 100 seasons since their last World Series championship and almost 70 years since their last World Series appearance) and Cleveland Indians (last World Series championship in 1948), and to a lesser extent, the Pittsburgh Pirates (20 straight losing seasons).

Even so, I'm still a Browns fan and will remain so. Hope springs eternal! Make the Factory of Sadness a Factory of Gladness!
Posted by Jon at 3:15 AM