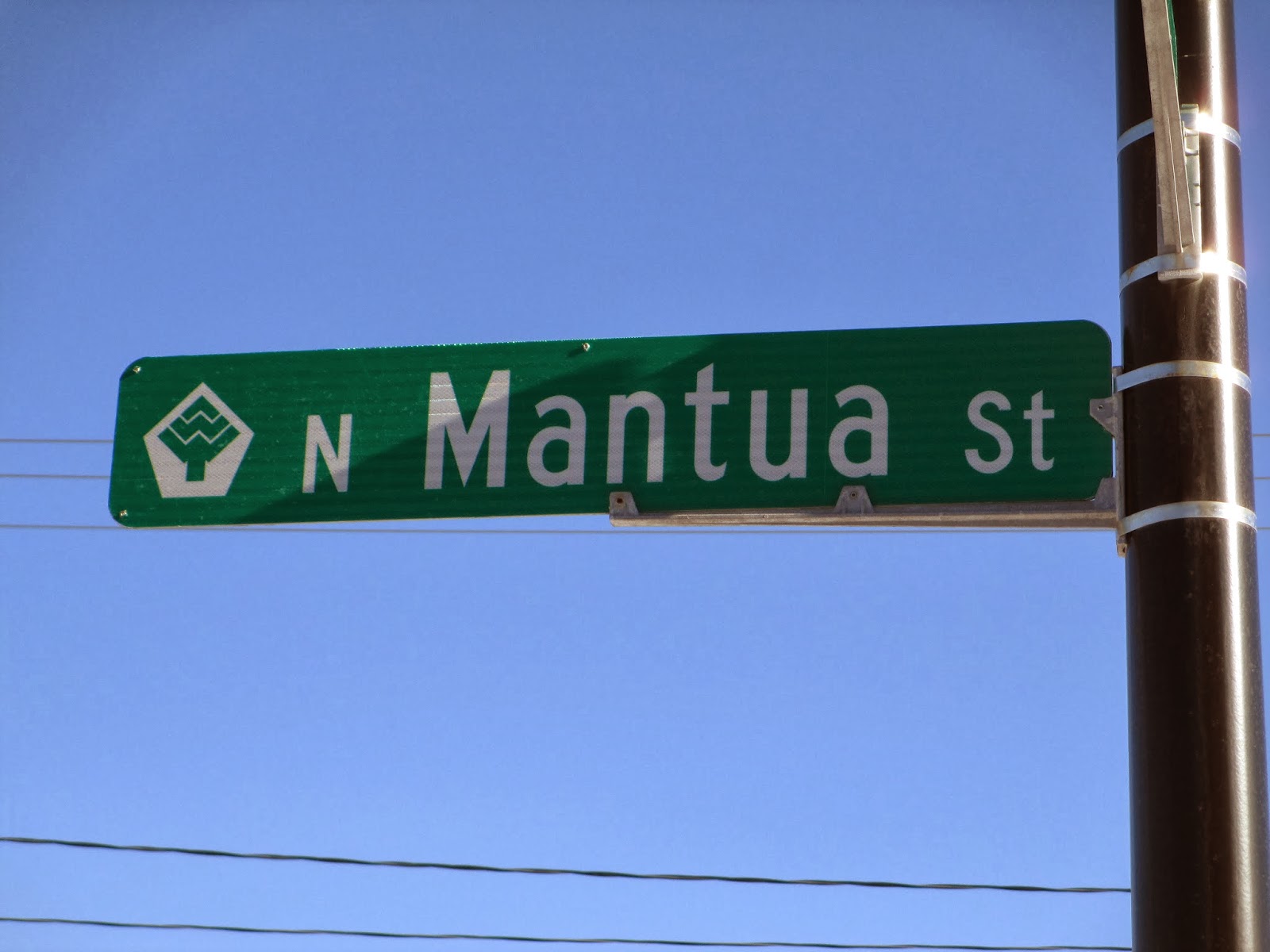 Here in Kent, one of our main north-south roads is Mantua Street, which is divided into north and south sections at West Main Street. The entire length of Mantua Street is also part of State Route 43. All but a short section of North Mantua Street is 4-5 lanes and the section that isn't (along with all of South Mantua Street) is two lanes going in one direction (south).

Every once and awhile, though, people look at a map and realize that Mantua Street doesn't actually lead one to Mantua (pronounced "MAN uh way"...don't ask me why, but it's a very old pronunciation!), a village to the northeast of Kent. OK, so why is it then called Mantua Street? And what about other roads in Kent that are clearly named for nearby towns but don't actually go to them? It's a matter of going back in time and realizing that the current setup for road routes isn't how they've always been.

The key to understanding the name "Mantua Street" is Diagonal Road, which is located just north of the Kent city limits. Diagonal Road is, as you may have guessed, a diagonal road. It's southern end is at State Route 43 less than a mile north of the Kent city limits. Diagonal Road's northern end is at Mantua Center Road, just a few hundred feet south of State Route 82 in Mantua Center, which is the center of Mantua Township. There's your "Mantua Street".

Today, Diagonal Road just appears to be a side street off 43 as you're heading north out of Kent, but up until the early part of the 20th century, instead of the intersection that exists today, the road heading out of Kent to the north had a fork in it. To the right, the road to Mantua, to the left, the road to Cleveland. Indeed, older maps of the area show the main road being Diagonal Road and Mantua Street with the part going to Cleveland as more of a side road rather than today's setup where the main road is 43. Only as the roads and the communities they went to developed more did the more traveled road become the road to Cleveland. Eventually a spur of the railroad was built in that area, so Diagonal Road was re-routed slightly and turns more to the west then it originally did to avoid crossing those tracks.


There are still physical reminders of the original path that connected Diagonal Road and SR 43. Just south of the current Diagonal Road-SR 43 intersection is a house that has a row of very large trees in front of it all lined up. If you look at the direction of the line, though, it doesn't parallel SR 43; instead the line appears to be moving away from the road as you travel north. If you look at a map of the area now, you can draw a straight line from the main part of Diagonal Road south and those trees line up with that path.

Another point to understand is "Mantua" itself. When people say they're going to Mantua these days, they mean the village of Mantua, which is located in north central Portage County, along State Route 44. But in the early days, going to Mantua meant going to what we generally refer to now as "Mantua Township", the 25 square mile block that almost surrounds the village of Mantua.

Mantua village also wasn't known as "Mantua" until 1898, however. For most of the 19th century, it was known as "Mantua Station". Mantua Township is actually a classic example of how New England naming conventions were used in the Western Reserve. The township (some areas use "town" instead of "township") was Mantua, and then within the township were three hamlets or settlements: Mantua Center (intersection of SR 82 and Mantua Center Road), Mantua Corners (intersection of SR 82 and SR 44), and Mantua Station (now the village of Mantua). Mantua Station was founded in the late 1840s when a railroad line was built through northern Portage County, hence the "station" part of the name. It had a brief period of growth, but was never that big. Mantua Center was intended to be the main settlement of the township since it's at the physical center. That, however, never really happened because of growth at Mantua Corners (it being on a busier road, which is now SR 44) and Mantua Station. Mantua Center is where the township school was located (now listed on the National Register of Historic Places) and where the township hall is still located (part of the Mantua Center Historic District on the NRHP).


The same is true for roads in Kent like Middlebury Road and Akron Boulevard. Changes in road layouts, mostly for the sake of traffic, have removed the clearly visible reminders of why they were named as such, along with name changes. Middlebury was a settlement in what is now eastern Akron. Originally, it was a rival to Akron, but eventually Akron grew to the point that Middlebury was absorbed by Akron. Middlebury Road in Kent originally lined up with Northeast Avenue in Tallmadge and continued on to what is now Southwest Avenue (which becomes Eastland Avenue in Akron). In the early 1970s, the re-routing of SR 261 created the current intersection of Middlebury Road and Northeast Avenue and also shortened Cherry Street, which used to intersect with Middlebury and Northeast as a fork in the road.

Akron Boulevard (and Majors Lane, which used to be Akron-Kent Boulevard) parallels the main water line that connects Lake Rockwell (Akron's main water supply located north of Kent) to Akron. That is why houses along Akron Boulevard and Majors Lane have such large front yards and long driveways. It is actually not that old of a road and has only existed since the late 1950s. While it appears like it could have originally lined up with Middlebury Road (and thus have gone to Akron), it is more likely it is named such because of the water line. Aerials from the 1950s show the road as a dead end near its current intersection with Middlebury. The road was connected to Middlebury sometime in the mid 1960s as more houses were built along it.

Middlebury Road also has physical reminders of its former route. The line of trees just west of the current intersection of Northeast Avenue (SR 261) and Middlebury follows the original route the road went. The area vacated by Middlebury and Cherry Street is now just a grassy area. Cherry Street was a veer to the right before angling northeast to its current location. The re-routing of 261 simply smoothed the curve out and removed the forks in the road, and broke the connection between Middlebury and Northeast, similar to Diagonal Road and Mantua Street.

So, if you ever see another road that looks like it's named for a town but doesn't seem to go there, don't assume that the current route is the way it's always been!
Posted by Jon at 3:07 PM