I published this on the Kent Patch back in January 2012 and figured I should post it here since I don't really blog there anymore, and it was on my mind recently when I read through a game program at the KSU football game yesterday. Anything I have added that wasn't part of the original post will be in italics.

Ever wondered why Kent State University's school colors are Navy Blue and Gold? Well, if you go to the university's website or one their athletic media guides, you will likely find the following story: the school colors were originally purple and orange in the charter that established Kent State Normal School. Later, the basketball team had their uniforms taken to a cleaner and the hot water faded the purple to blue and the orange to gold. The student body liked the new colors and voted to change them. Sounds simple enough, but is that the whole story? Is it even close?

What does that have to do with the school colors for KSU? It just goes to show how "folk history" often simplifies and puts two facts together that were never meant to be together and draws conclusions from them or creates a new story all together.

The first item I would like to see but haven't had a chance is the actual charter document. According to the "faded colors" story, the original school colors of orange and purple are listed as such in the school's charter. I have not been able to track that actual document down.  That could at least verify that the colors were orange and purple at one point. (After publishing this post, I found an FAQ page from Kent State's Special Collections and Archives that stated: "The founding of Kent State University was a gradual progression encompassing several years; there is no evidence of an official charter." That page has since been changed and has no mention of the school colors or the charter and searches for anything related to the university charter come up empty. It is worth noting that Bowling Green State University, Kent's sister school founded on the same bill in 1910, states their colors of orange and brown were suggested by a professor who recommended them to the board of trustees. If BG didn't have their school colors written into their alleged charter, why would Kent?)

What I have been able to track down thus far, however, lists not purple and orange as the original school colors, but blue and orange. One of the great resources available from Kent State to study their own history is the digitized library of every yearbook published by the university.

From 1914-1985 (except 1920), KSU published a yearbook that was called the Chestnut Burr. Not only is every year available online, but it's also digitally indexed, so searching for keywords within one book or across all of them is very easy. I've referenced old yearbooks before because they are very valuable tools in research. Sometimes they directly say something that is a fact you are looking for. Other times, there are references to events or people that prove a certain fact. Many other times they have pictures that can tell us a lot about an event, building, group or person.

Being contemporary sources of the period, they also offer us glimpses into the way things were; how people dressed, how they thought, what was considered humorous, what was considered important, etc. For this, we have some direct evidence for orange and blue as the school colors.

Both the 1914 (first yearbook) and 1915 books make direct references to the school colors as orange and blue. The 1914 yearbook has a page that says "School Colors: Orange and Blue" at the bottom, and later has a page entitled "Our School Song" which references "her orange and blue." The 1915 yearbook has a school song "The Orange and Blue" on a page. The earliest reference to blue and gold as school colors in the Chestnut Burr is the 1921 edition, which has a picture and description of the "Blue and Gold Debate Club." (In later views of the yearbooks, I found an earlier mention of blue and gold as the school colors as part of a poem. Page 87 of the 1916 yearbook has a line that says "To Normal, her blue and gold." The next year, though, there is another clear reference to the colors as blue and orange, showing how both gold and orange were apparently being interchanged. There are multiple references in the early 1920s of the athletic teams being referred to as the "Blue and Gold" as well.)


But where did orange and blue come from? According to the first history of Kent State, The Years of Youth, written in 1960 by Phillip Shriver, the orange and blue originated from the university's first president John McGilvrey. He cites a March 13, 1913, article in the old Kent Courier and writes that McGilvrey "determined" that the school's colors would be orange and blue. Shriver credits McGilvrey being a "staunch Illini," though even in his own book, he also writes that McGilvrey was from Indiana and while he was on the faculty at the University of Illinois for a time, it was only for three years. He did not attend school there (McGilvrey had degrees from what is now Indiana State University and Indiana University, so if anything he's a Hoosier!). McGilvrey also served twice as a principal for two high schools in Illinois and was at what is now Western Illinois University just prior to coming to Kent.

So, is it a definite that the school colors of orange and blue were inspired by the University of Illinois? Shriver seems to think so, but the connection doesn't seem so obvious to me. It's definitely possible. In doing further reading, the first four faculty hires by McGilvrey were all from the state of Illinois, three of whom had degrees from the University of Illinois. So there was definitely some connection with the University of Illinois at Kent State in those early days. Shriver states that blue and gold were used interchangeably with the orange and blue for a period (doesn't appear to be very long) before blue and gold officially won out in 1925 by virtue of a committee. No mention is made of any vote from the student body, nor any mention of faded uniforms. There is also no given reason as to why blue and gold were selected or any significance behind them.

In looking at the difference between the color gold and orange, it's easy to see how they could be used interchangeably. Often times today we use yellow instead of gold, but gold as a color (not a metal) is much darker than yellow and is actually a yellow-orange blend. Was it a matter of fading? Perhaps, but it could also just be a matter of general use. 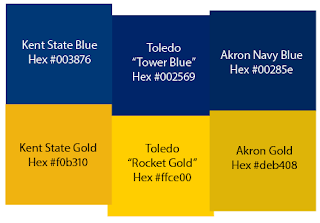 Of note, Kent State is one of three schools in the Mid-American Conference that use blue and gold as school colors, the other two being the University of Toledo and arch-rival the University of Akron. All three schools use slightly different shades of blue and gold. For instance, Akron uses a slightly darker shade of blue and a darker, more metallic gold. On sports uniforms, the shade of metallic gold looks almost tan. Toledo uses more of a yellow ("Rocket Gold") with a shade of midnight blue known as "Tower Blue." As far as fan support goes, Kent State has emphasized the "gold" more as the main color ("Get your gold on!"), while Akron seems to emphasize the blue more or white. Toledo tends to use the blue and gold pretty evenly.

I'm planning to search the archives of the Record-Courier here in Kent soon to go over some of the articles from the old Kent Courier that Shriver mentions in his book as sources. Hopefully they will have some additional information that can give me a little better understanding of where the colors came from. UPDATE, 10/15/13: In searching the archives of the Record-Courier, I found a mention of the school colors in 1913, but the date of the article was 2 months after the citation given by Shriver. The article, which covers several developments related to the school, simply states that the colors are blue and orange. That's it. No reasoning is given for them or who even made the suggestion. It was simply a matter of business.
Posted by Jon at 10:57 PM