The Evolution of Roosevelt High School

Continuing with my Kent Schools-related posts, I figured I'd post about the "evolution" of the building that houses Theodore Roosevelt High School on North Mantua Street in Kent, a building I have spent an incalculable amount of time in as a student, community member, and employee.  Most locals know that the building has had several additions, but I have found most don't realize just how many it's had in its history.  As I've been going through old yearbooks and dedication programs, I've been able to mostly piece together how it all came together.

The building first opened in September 1959.  It replaced the previous home of Roosevelt, which became Davey Junior High School.  The new school was built with growth in mind as it was built on a concrete slab (no excavation required) and had walls that were designed to be removed easily for additions.  It was also built on a 31-acre piece of land, three times the size of the previous high school campus.  Despite the extra room, football wouldn't be played at the "new" campus for 11 more years.  The new building also lacked an auditorium as the budget wouldn't allow for one at the time.  Plans were in the works for an auditorium at the time the school opened, but there wouldn't be an auditorium until 1972.  What I found interesting about the original building is that it was divided into sections.  Music was almost a completely separate building, vocational was on its own end, and the remainder of the school was another end.  This was done so that things like band  and wood shop wouldn't disturb other classes.  What's ironic about that is the fact that less than 10 years later, the first addition to the building added a new library that bordered the band room on two sides. Even today, though, the sound is kept out of the library pretty well!

When Roosevelt opened in 1959, Kent was in the midst of its greatest period of population growth in its history.  From 1950-1970, Kent grew from about 11,000 to over 28,000.  Because of this, Roosevelt was in what must've seemed like a perpetual state of construction.  As I mentioned, the first addition was made in 1965-66.  It involved adding what is now known as the "history hallway" (or wing), doubling the size of the cafeteria and central lobby (a room often incorrectly referred to as the "atrium"), and expanding the locker rooms.  Some of the rooms in the original building were altered to fit where the new hallway had to be.  It looks as if one classroom was lost from that.  The current library was also part of that addition.  Prior to that time, the doors to what is now the library that open to the cafeteria were the main entrance to the school and were simply a "glass hallway" of sorts that connected the music wing to the rest of the school.  The old library was converted into what are now the Principal's office and the guidance offices.

The next major addition was the largest.  It was actually 2 parts, but it effectively doubled the size of the school.  On one side was the end of the building known as the "vocational wing" or now as the "Career Ed Wing" and sometimes as the "500s wing" (since all the rooms there are numbered beginning at 500).  The other side was the auditorium and scene shop addition, which included a lobby (also incorrectly referred to as an "atrium").  The auditorium lobby provided a new front entrance facing North Mantua Street and created a courtyard, connecting the music wing with the history hallway.  This addition was started in 1971 and opened in the fall of 1972.


The pool addition followed in 1975, opening in 1976, and included three classrooms, storage areas, and locker rooms.  It also resulted in the modification of the original art room as part of the room had to be used for the hallway that connected the pool wing with the rest of the school.  Just one year later, construction started on the last major addition to the building, a second floor addition above the history wing.  This addition is now referred to as the "foreign language hallway" (since all of the foreign language rooms are there) and included the construction of an elevator and two staircases.  Completion of the addition allowed the district to move 9th graders back to Roosevelt beginning in the fall of 1978.  Prior to that, 9th graders had been housed at Davey Junior High School since 1959.  The 1978 addition also included a slight extension of the library into the courtyard and an expansion of the industrial technology room (added the extra classroom and back lab area) and creation of the photography room.

The last addition happened while I was a student at Roosevelt in the late 1990s.  This addition in 1997 involved expanding the cafeteria, creating the curved glass wall that is there now, building a new teacher's lounge, and opening the cafeteria to the lobby.  Previously, the cafeteria and gym lobby were separate rooms.  A new music storage room was added and the entrance was redone.  An expansion of the second art room was also part of the project, which also funded renovations in other parts of the building.  In particular, every room was wired for high-speed Internet, additional electrical outlets were added, and a school phone system was installed. The band room was totally renovated during this time, adding a second entrance from the hall, removing the tiers in the floor, and improving the lighting.  The choir room also had a new floor put in, new lighting, and new risers, plus a permanent office was built in place of the old cubicle that had previously served as the vocal music office.

The only changes since the 1997 additions and renovations have been remodelings.  The library was remodeled around 2003 with new lighting, carpet, and some wall changes which included a computer area and a larger computer lab that can be a separate room if needed.  The room that was previously the audio/visual storage area (and had the main copy machine) was turned into a second computer lab, now known as "Computer Lab II" (it is also room 108).  Old room 109 was divided into three parts and the front part is the copy room while the middle and back parts are storage areas for things like the TVs and VCRs.

What's next for the school?  That remains to be seen.  About 2 years ago the district did a survey of parents to gauge what appeared to be the possibility of a levy or bond issue.  Among the questions asked were two about Roosevelt: one regarding the addition of a second gym and the other about addressing the nightmare that is parking.  I've long wanted to see Roosevelt get the existing gym expanded or replaced and/or a field house building similar to what the new Ravenna High School has, which includes an area that can be divided into 2 basketball courts, but also has an elevated track and a separate physical education room for other classes.  I saw a larger version of this under construction at Avon Lake High School in 2001 that I really liked.  Seeing it at Ravenna has me liking it even more!  Roosevelt really needs some additional space for physical education.  I've subbed several times for PE and one of the classes we have is dance class.  More often than not it's held in the auditorium lobby, which is absolutely freezing this time of year.  If not there, it's held in the "wrestling room", which is the old weight room in the back of the boys locker room.  The gym itself is the same size as it was when the school opened in 1959; when the school had 550 students.  Same size gym now for about 1,400 students and a larger community.  For the sake of tradition, I'd love to see the gym expanded instead of replaced, but money will determine that!  The whole layout of the parking area is an entirely different topic!  What a mess! 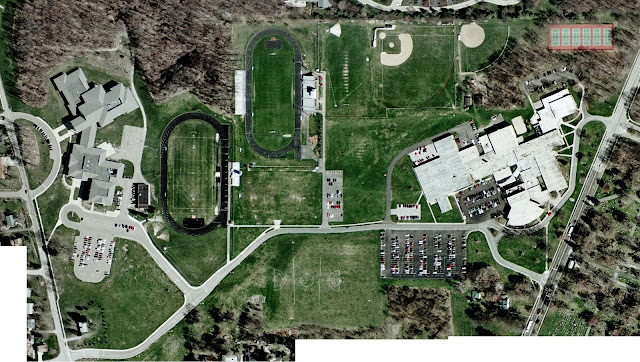